With the majority of the competitors now in the Doldrums just north of the Equator the daily miles totals have dropped dramatically. There is now laess than fifty miles seperating the first 5 boats after 10days of racing.
Leading still is Loick Peyron in Gitana, 2nd is Sab Josse in BT and third is Armel le Cleac'h in Brit Air. 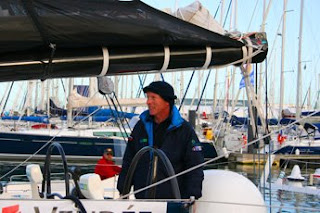 Of the British contenders Mike Golding in Ecover has moved up to 6th, Samantha Fox in Roxy is 11th, Brian Thompson in Bahrain Team Pindar is 12th, Dee Caffari in Aviva is 15th and steve White in Toe in the Water is 16th.

The Doldrums are so unpredictable that the change of position can often be a question of luck, being in the right place when the winds pick up, rather than on skill and tactics.