Our intrepid writer and reviewer of all things Vendeen is now back in his mansion (Chateau) in the south Vendee and this year he has new wheels to get about so we are sure to have more and varied reviews.
In the following article Tate explains more about his new found wings which will be followed by articles on how the handicap see the Puy du Fou and La Rochelle.

It’s May 2009 and after a long cold winter in Blighty, I’m finally back in the Vendee, but this year there’s a difference, this year Thunderbirds are Go.

I’ve been caught in the diminishing mobility spiral for some time. It may come as a surprise to some, but this is not due to me being rendered legless through an over indulgence in alcohol, it is rather as a result of limited mobility. This has lead to a lesser ability to exercise promoting weight gain producing further limitations to my mobility etc. etc. The upshot of all of this has left me spending less and less time out and about and doing things while in the UK and more time at home. The problem has been less prolific in France as when the weather’s good I can spend my time next to and in the pool and as most of my friends have accessible dwellings with plenty of parking, visiting here is much easier. Nonetheless I have still been severely restricted in what I could and couldn’t do, so late last year I bit the bullet and bought myself a Mercury Neo 4 Mobility Scooter, known hereafter as T8 (Thunderbirds 8) and just like that my life was transformed. Places that had been entirely out of reach were now easily within my compass, it didn’t get me dancing but it did get me in the ballroom.

I knew that just buying the scooter wouldn’t be sufficient, and that I would need to get it close enough to places to be able to use it effectively, after all scooting to Tesco’s from my house was one thing but scooting to the house in France was way beyond the scooter’s capabilities. Now those of you who are old enough to remember the 60’s TV series Thunderbirds will know that their transport vehicle was Thunderbirds 2, my T2 is a converted Mercedes Vito Van. As in the series everything is remote controlled and automated. The rear doors open electronically and the Ricon lift folds out like a flower opening at sunrise it then lowers seamlessly and I am able to drive T8 onto it. Another touch on the remote and I’m levitated and able to scoot into the belly of the beast, with the lift folding back into the van and the doors closing and locking themselves. The wonders do not end there as I have an electric driver’s seat, some of you out there (Stephen you know who you are) might say better that it was an electric chair. In addition to the numerous Mercedes gadgets on the seat it is independently powered and moves up and down, forward and back and swivels, I’m still looking for the Tea’s made which I’m sure must be concealed somewhere within.
Since arriving in France I have been to several supermarkets and 2 major DIY warehouses, “Whoopee” you might say “Big deal” well actually when you’ve been unable to do these things for as long as I have even the most mundane of tasks takes on an almost spiritual quality, add to that days spent at the Puy du Fou and La Rochelle, both of which I will cover individually in separate articles, and I hope you can see that this has given me back a degree of freedom that I thought I’d lost forever. All in all these truly are very impressive pieces of kit. I may not have the slide away pool or the fold down palm trees of Tracy Island but in all other respects
Thunderbirds really are Go!!
Tate 7th June 2009 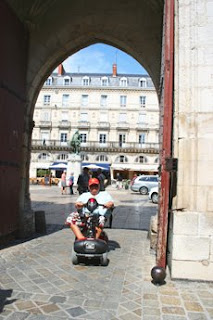 Email ThisBlogThis!Share to TwitterShare to FacebookShare to Pinterest
Labels: Tate2