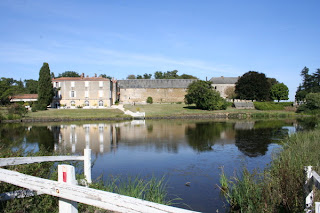 The Journee du Patrimoine are literally day of inheritance when many of the historic buildings are open to the public, These can include privately owned properties so on the third weekend in September you have a chance to look around at some of these historic treasures.
This year I choose to view two of the best. The chateau de Bessay in the south of the Vendee, built in 1577 it saw many changes before falling into seriously bad repair. Saved twenty five years ago and restored to much of its former glory it made an enchanting specticle in the dazzling September sunshine.This chateau is open to the public during July and August, every afternoon except Sundays.
On the Sunday I visited the Chateau-du-Parc-Soubise near Mouchamps in the Vendeen bocage. The property of the Chabot family it is only open on the Journee du Patrimoine. The guided tour of the exterior of the chateau and parc and a look at the Chapel, the medieval farm building which included a tythe barn and a beautiful building with cellar below and a grenier above, the later of which had an amazing bateau roof built in the shape of an upturned boat by shipwrights from Mont-Saint-Michel.
You can view the videos of both of these properties on Chateau de Bessay video and on Chateau-du-Parc-Soubise.
Posted by Trevor at 3:03 AM

Hi, this is Dave from An Englishman in La Tranche. Thank you for the great comment on my blog. You're welcome to use any photos. Perhaps you could send me your email address in a comment - I won't publish it of course.
Best wishes,
Dave
ps I'm sure we overtook you on the La Roche to Nantes road on Saturday afternoon - you have a distinctive van!!